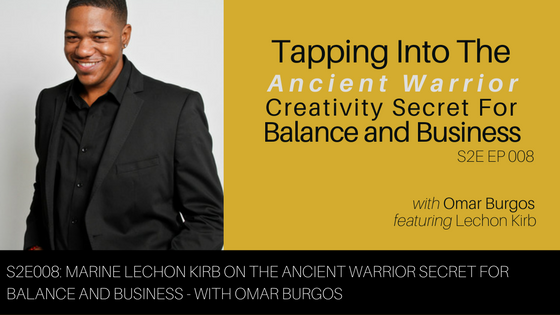 There’s an ancient not so obvious creativity secret that warriors have been using for centuries to balance the business of battle, life and making entrepreneurship.

In this episode, Lechon Kirb joins us to chat about this creativity and how he went from rifleman to celebrity cameraman.

His popularity took off after his photos of singer/songwriter Usher, were published in ORIGIN Magazine. Since then Red Bull, Universal, NBC, BET, VH-1, Smirnoff, Master Of The Mix, Hootsuite, Buzzfeed, Holstee, Huffington Post and many more publications, media outlets, magazines, and television networks have featured his work.

The inspiration behind Kirb x Co, Lechon Kirb is an image brand developer and professional photographer and Founder of Brand Legend.

IN THIS EPISODE YOU’LL LEARN

LINKS AND RESOURCES MENTIONED IN THIS EPISODE:

Thanks so much for joining us this week. Have some feedback you’d like to share? Leave us a review on iTunes!