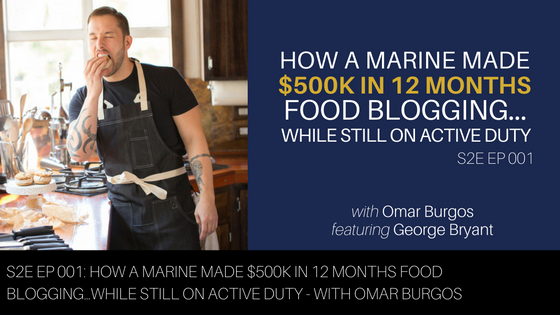 Ever hear about the Marine who made $500k in 12 months talking about food…while still on Active Duty?
In this episode, I chat with George Bryant, Marine and Civilized Caveman, about his journey.
He overcame bulimia, addiction to pain, almost lost both legs and suffered from traumatic brain injury and PTSD.

He is also the New York Times Best-Selling author of The Paleo Kitchen and creator of the wildly popular Paleo food blog “Civilized Caveman Cooking Creations.”

What started as a simple place to post recipes for friends has since turned into an award-winning food blog.

After being in the Marines for 12 years, George has since been medically separated and is enjoying working full time creating delicious Paleo recipes, while hoping to change as many lives for the better by making REAL food recipes simple and tasty.

Other interesting things you probably don’t know about George

IN THIS EPISODE YOU’LL LEARN

LINKS AND RESOURCES MENTIONED IN THIS EPISODE:

George livestream’s every day on Caveman.live where you can hang out with him live and ask questions.

Thanks so much for joining us this week. Have some feedback you’d like to share? Leave us a review on iTunes!